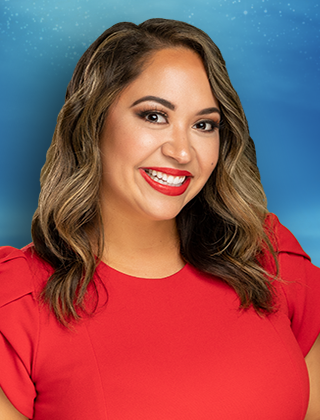 Chelsey Khan is a host of "We Are Austin" on CBS Austin. Chelsey joined the CBS Austin family in August of 2022. When she's not on camera you can find her roaming the streets of her hometown checking out new hot spots surrounding the forever growing city of ATX.

Prior to returning home to Austin, Chelsey and her husband spent time in Virginia Beach, Virginia as Chelsey hosted a local lifestyle show interviewing comedians, musicians, and other celebrities. It was Chelsey's goal to try life on the East coast, but nothing beats home. Especially if that home is Texas.

In 2018, Chelsey worked as a Consumer Anchor at KTRK in Houston, TX where she helped viewers make the most of their hard-earned income. This included a segment called 'Stretch Your Doller' which helped consumers in the nation's seventh-largest city save money and score deals on everyday purchases.

Before Houston, Chelsey spent three years at KENS-5 in San Antonio where she wore many hats including producing breaking news along with reporting entertainment and lifestyle segments.

She graduated from the University of Texas – San Antonio. After graduating she got her first journalism job at KAVU in Victoria, Texas as a general assignment reporter and was then promoted to morning anchor.

Today, Chelsey's biggest joys come from her two dogs Bentley and Penny whom she shares with her husband. The newlyweds are excited for their Texas return and enjoy hiking, cooling off in one of our many lakes, and spending time with family and friends.

If you have a food recommendation or good book Chelsey would love to hear from you!